It’s Christmas Day, and some of our favorite LGBT icons, here and abroad, are out and proud in showing how they celebrated the most wonderful time of the year.

Here are Speqtrum’s favorite LGBT couples who never fail to inspire us with their love.

Event organizer Niño Gaddi posted this adorable photo of him with his partner magazine executive Vince Uy at a vacation in Osaka, Japan.

Uy also posted this photo on his Instagram account of the same trip in Umeda Sky Building in Osaka. He called Gaddi his “travel bubby.”

The partner became famous for their billboard ad by clothing line Bench. The ad drew controversy when their clasped hands were censored and painted black.

The couple was also featured in the front cover of the Philippines’ gay magazine TEAM.

Seguerra posted on her Instagram account this adorable photo of her kissing her wife on Christmas eve.

Diño also posted a status on her Facebook account expressing her gratitude for those who supported her relationship with Seguerra.

Seguerra and Diño first got married in California on Dec. 2014, and had a ceremonial marriage in Laiya, Batangas here in the Philippines the next month, according to this report. Diño has a toddler daughter named Amara.

But Castro celebrated his Christmas with no other than the family of Chua here in the Philippines, for more additional boyfriend points.

They may be a West Philippine Sea apart, but the couple did not forget to keep in touch over the webcam. Castro celebrated his 26th birthday on Dec. 22, and Chua greeted Castro with a charming smile. 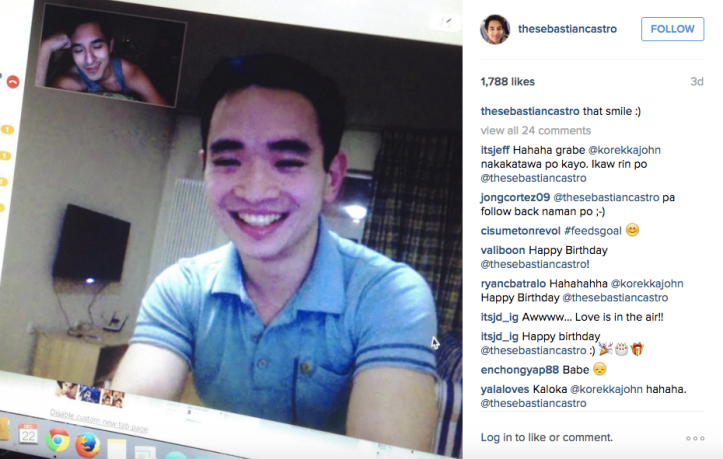 Castro and Chua have become a fixture as advocates during Philippine gay pride marches and are not afraid to show off their love.

Sebastian first came out when he was 17 years old. He was also thrown out by his family, devout members of the Jehovah’s Witness, and has since moved in to the Philippines to serve as an inspiration.

Miss International Queen 2015 Trixie Maristela and her partner writer Art. Sta. Ana posted on their respective Instagram accounts a heartfelt Christmas greeting for their supporters as they were lounging at the Crown Tower Resort, City of Dreams Manila.

Happy Merry Christmas Holidays to all our friends and families and enemies and neighbors and acquaintances and yahoo messenger friends and friendster friends! Love #artrixie @trixiemaristela

Maristela this year won the Miss International Queen title, the most coveted beauty pageant in the transgender community.

Maristela is also the reigning Ms. Gay Manila. She had her first break when she won “Eat Bulaga’s” Super Sireyna Philippines beauty pageant in 2014.

Sta. Ana, an aspiring pilot and former radio DJ, is the author of the book “He’s Dating the Transgender,” where he shares the story of his relationship with Maristela.

“How I Met Your Mother” star Neil Patrick Harris and his husband David Burtka posted this adorable Christmas greeting video on Instagram with their twins Harper and Gideon.

“From our family to yours!” Harris said.

Harris and Burtka married in Sept. 2014 after having been together for over 10 years. They had twins through a surrogate. 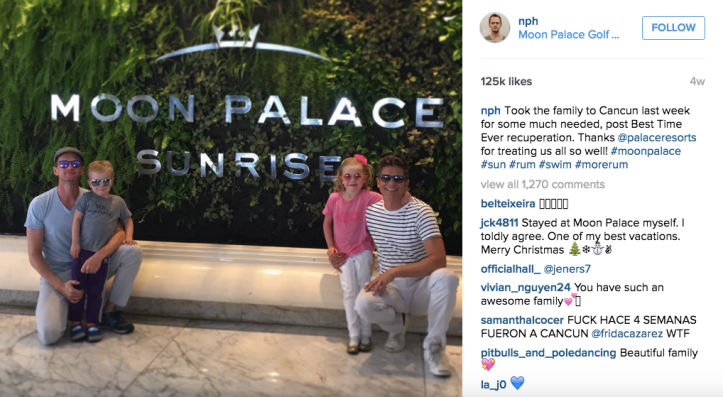 The Youtube stars got married just this year and have now moved on to becoming adorable dads.

Hamilton posted this Instagram photo of Crow having his very first Christmas eve meal in the household.

Here’s another photo of the adorable kid lying down with his gifts on Christmas eve posted on Instagram by his second dad Dallas.

There is another photo of the two dads and their little boy’s sock-clad feet in vibrant Christmas colors.

SpeqtrumPH is an online news organization that seeks to legitimize the issues of LGBT, or lesbian, gay, bisexual and transgender, in the Philippines. It reports the news and culture surrounding the LGBT, with the aim of legitimizing it as a formidable sector in Philippine society. Got a tip? E-mail us at speqtrumph@gmail.com